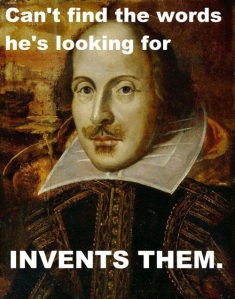 I was cruising a copywriting forum (no, I’m not going to tell you which one) the other day and I got sucked into an discussion started by a Chinese Native living in France.  She wanted to know how to become a copywriter, and it was a fair question.  However, her English was fucking horrendous.  I mean, just… not fluent at all.  Not one fucking person in that thread had suggested she become fluent in American English (at least, not at the point when I left), instead they pointed her to books and classes and the sort of thing that would be useful to an already-fluent English speaker.

Not just anybody can learn to write American English fluently.  Not even remotely.  I’m going to go out on a limb here and say that to properly write American English, you have to be able to properly speak it, regional dialects and colloquialism aside.  You have to hear the beat of the language in your ears like a song before you ever fucking try to set pen to paper.  And English is NOT an easy language, which is why no one born on foreign soil stands a chance of learning to write it properly without moving to an American English-speaking region.

Our language, that one we all write and speak and read traffic signs in, has its roots in Latin, that’s true.  Mostly.  Kinda.  Sorta.  We also have the ancient Germans and Celts to thank, along with the Spanish, Mexicans, black slaves forcibly removed from their homes and families to toil on American plantations, Native Americans, the French (!!) and once-isolated conclaves of English speakers who may or may not have tweaked some words in their captivity to thank for this mess.  Among languages, English is generally considered to be as difficult for non-English speakers to learn as Japanese and Mandarin.

What this means, kiddos, is that unless that Chinese person living in France wants to spend the next five to ten years of her life mastering the art of American English by herself, she’s going to be screwed.  And I feel a little bad for her, after all, this type of massive disappointment happens every fucking day.  I have a great deal more Indian connections than a farm girl from southwest Missouri would have ever expected, and they want very badly to become great writers for an American audience, but what they lack in their UK English based education is the very stuff it TAKES to be a proper American English writer.  Namely, this one thing:

You. Must. Be. American.

There.  I said it.  C’mon, I know you want to accuse me of something.  Racism, Xenophobia… whatcha got?  I don’t care if you’re fucking born here or if you moved here and enveloped yourself in the culture like a Goddamned Chinese cultural burrito, learning to write for a cultural group is a lot more than throwing a bunch of words at the wall and hoping a few dozen of them make sense.  You have to breathe it and taste it and hear it and WANT it in an epic way.  When you’re bare-assed naked in the shower, you have to wash yourself in it, and dry yourself with it….

You get my point.  A language, any language, is more than the words or the sounds or the RULES, it’s a whole mentality.  So, that’s the first big lie in a nutshell.  You can’t learn to write American English without being American.  But that’s not the end of the fucking world.  You can be a very good Chinese-French copywriter without being fluent in American English, I’m certain they have commercials and blogs and postcards and all sorts of advertising materials over there.  Just fucking write what you know.