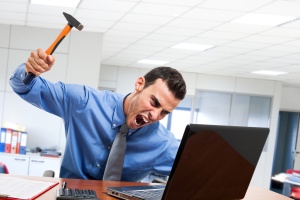 Writing a novel is something like writing a marathon.  You can’t look back — I’m pretty sure it’s against the rules.  Also, it makes you stumble and you usually end up with pavement burn… that shit stings.

You Can’t Afford to Look Back

Ok, so clowns won’t actually eat you, but looking back over your work is a temptation you can’t afford when you’re trying to bang out anything.  Looking back leads to reworking and reworking lead to deleting large passages and deleting large passages leads to throwing your hands up and screaming “FUCK IT!” at the top of your lungs.  Trust me on this.

To be successful at this novel-writing thing, you’ve got to stare ever-forward into the molten, burning heart of the unforgiving sunset.  Look forward, face forward, plan FORWARD, and keep fucking running.  I mean writing.  Writers don’t run.  That’s the first rule of Writing Club.

Don’t look back, that’s my point.

It’s a common problem, but the roots are usually in one of these places:

Control Issues.  OMG!  You’re a grammar Nazi.  Man, I hate fuckers like you.  Still, if you are a grammar Nazi, now’s the time to tame your personal demons.  It’s not time to quibble over whether or not you used the right form of “whose” or if your spaces are the correct distance apart.  JUST WRITE and edit later.

The Doubting Man.  I covered The Doubting Man in this blog post, so you should already know what to do about him.  That little fucker’s the reason we can’t have nice things.  He shits on everything we love and tells us we suck.  Kill him!  Kill him with fire!  Then write.

Keeping Up the Pace

Some of you may be legitimately losing your stride because you’re exhausted.  Writing is a tough business.  This is what I do every day, six or seven days a week.  And it takes real mental stamina and grit to keep going… there’s no joke about it.

If you’re starting to lose steam instead of looking back too much, I’ve got a different set of suggestions.  Those are:

Find Your Eye of the Tiger.  When my writing team at Top Shelf Copy is starting to drag ass and feel like they’re about to die right before deadline time, I make them all listen to Survivor’s “Eye of the Tiger.”  If that doesn’t work, I punch them in the faces repeatedly until they look like hamburger.  When you’re running your race and all you want to do is lie down and die, see if you can find some music to stimulate your brain.

I have a playlist called “Write Like the Wind” and another called “Damn the Torpedoes” that I use when I’m in that spot.  It’s not instant adrenaline, but it builds until I can keep going again.  I highly suggest you find one of your own — stuff like workout playlists, running playlists and that sort of thing usually are pre-rolled and work best if you don’t have time to build one.  The trick is to turn that into background music and pace to it.

Running and writing aren’t that much different.  I’m convinced I burn calories as I tap on the keys.

That’s why I’m so slim and trim.

Take a Break.  Yeah, I said it.  If you’re mentally exhausted, kicking that horse doesn’t help.  It’s still dead.  Take a day or two off, give yourself a weekend, something… because when you’re tired from writing, you’re never going to get re-energized by continuing to move.  I was given this advice years ago by a wise old Captain.  He was also a writer, but he was also a Captain.  I think he worked with mermaids before he started writing.

Anyway.  It’s burn-out, plain and simple.  Some people have a little bit left and can push on, others don’t.  Don’t hurt yourself, your book and your joy in writing it by forcing yourself to keep going.  You’re tired.  Take a day.  Take a week.  Fuck NaNo and do what works best for you.  Rest and get back to it.

Shelve Your Book.  This is a risky move, as you probably know, but sometimes you have to shelve your book to get some new perspective.  If you’ve tried taking a break and you just can’t find the energy to pick it back up, shelve that baby.  Give yourself a month or two, then look at it again.

Maybe you just can’t crank this book as quickly as you thought.  Maybe you need more time.  It’s ok if you do — but admit it for the sake of your book and sit it on a shelf.  When you come back to it, remember that it’s a rough draft, with “rough” being the important part.  It’s not going  to be perfect, so when you pick it back up, don’t judge it.  Just write.

But whatever you do, don’t look back, because your rough draft is just that.  It’ll get better.