My schedule and my life got really fuckered up there, what can I say?  I’m not going to apologize for being a real human being with a real fucking existence, got it?

What I am going to say is that sometimes your best laid plans and schedules go right to Hell.  Sometimes you plan and shit happens.  And sometimes, once in a great while, the planets align just right to completely fuck up to your entire summer.

Since the beginning of summer I’ve:

I’m back up, don’t think this is a chance to come in and fucking pick at my remains, but it was touch and go for a while.  Stress is a real cunt.  That being said, this freelancing writing job isn’t easy when things happen.  I mean, really.  I’m at the top of my game and I had some clients who told me to go fuck myself as life continued to happen over and over and over again.

When it rains, as they say, shit slides downhill… or something.

Anyway, today’s blog post is about telling you to go fuck yourself.  Wait, no, this one is about what to do when your schedule gets derailed by life.  Because life is a fucker.

What to Do When Your Planner Bursts into Flames 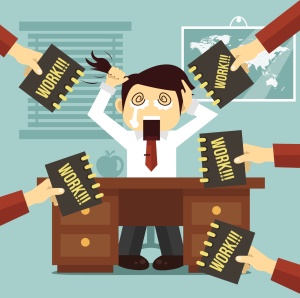 Everybody experiences life happening sometimes, whether it’s due to an external force (the death of a close friend, a giant hole in your roof caused by an airplane bathroom falling from the sky, your neighbor’s kid breaking your nose, etc.) or internal forces (self-doubt, depression, delusions of grandeur, uncontrollable spending after finally getting a pay day).  When this shit starts stirring, your carefully scheduled writing schedule most likely will go haywire, get out of control and end up fucking you.

So, what do you do?  Is there a way out or is Seppuku the only answer?

Put down your tantos, you can weasel out of this….

If there’s anything I’ve learned the last couple of months, it’s that the Gods at Google won’t blacklist a site for missing a few blogs, it won’t strip your traffic accomplishments for a few hiccups.  So the best thing to do, if your client is amicable, is to start over.  Forget trying to write the backlog — you’re just going to get further and further behind and exhausted to boot.

Hit the reset button, beg for forgiveness, give your client a discount, make them a muffin basket, allow them to be a good human and overlook your service issues.  That’s all you can do.  I know I built it up… sorry.

Poof!  Problem gone, provided you’ve solved the life issues that were fucking your schedule up in the first place.