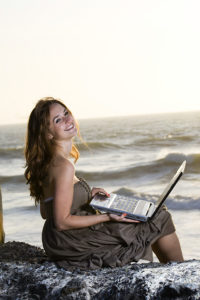 Ha ha ha! See how much fun I’m having working on the beach? Holding the computer like this is giving me carpal tunnel syndrome. Hee hee hee. It’s the best! Also why are my pants wet?

I love the ads that I see now and again telling people that they can “write from the beach,” or implying as much with a photo of someone with a laptop and a brightly colored fruity drink.  I get no end of amusement from these ads.  If you’re a freelancer, you know what I mean… they’re fine fodder.

Instead of posting anything useful today, I thought I’d just talk about all the great things there are about writing from a beach.

Wanna hear it?  Here we go!

Your Career, But on a Beach

Moving your career to a sandy spot near the water may seem like a glorious achievement, but as a writer, I can see some immediate problems you’re going to have to overcome.  Unless you’re in a Lost situation, really consider if beach-writin’ is for you.  These are a few of my immediate concerns:

Seagulls.  I don’t know if you’ve ever seen these garbage animals that evolution has also given the ability to fly around so they can randomly become garbage planes, but they’re truly the wurst.  You hate pigeons?  Seagulls are like a hundred times worse.  The only bird that earns more of my ire than the damn seagull is the motherfucking duck.  Ducks have no respect for public walkways and I, for one, won’t stand for it.  I’m starting with Seagull and working my way to you, Duck.

Jellyfish.  Oh, I’ll just sit my laptop down for a few minutes to take a little walk on the beach to clear my head without my shoes because wet sand is aHmaaaazzzinng… ouch!  What was that pointy Jell-o slab I just walked in?  WHY AM I NOW IN SEARING BURNING PAAAAAIIIIIIINNNNN?!?!?  OMG!  SOME GUY IS PEEING ON MY FOOT!!!!!!!!  … KILL ME NOW!….

Wifi.  Um, where, exactly, is the wifi on the fucking beach?  Is there a hotspot in your ass?  Even if you were using a cell phone for all your work, your bill’s gonna be huge, much more than any writer can conceivably make, plus also the reception is probably shit because a lot of beaches are in places where 4G hasn’t arrived yet.  At best, you’re writing from the bar on the beach, where they have a slow guest network for slags like you.

Electricity.  Back to the fundamentals.  Your laptop doesn’t run on seagull poo and dead jellyfish, so you’ve got to sort that.  Sure, your battery might get you an hour or two, but let’s face it, this is a 12 to 14 hour a day job.  Even Chromebook can’t boast that kind of battery life.  Back to the bar with you.

Sun.  Are you a pasty white writer who dreams of writing on the beach?  Well, sorry, Charlie.  You’re gonna get radiation poisoning from sitting out in the sun that long.  Also, how do you plan to actually see your laptop’s screen?  Yeah.  You didn’t think about that, did you?  So far you’re really never leaving that bar.

Sand.  Sand is awful.  Not as awful as seagulls, but up there.  It’s gritty, it gets into everything (that’s where the expression “sandy vagina” comes from, didn’t you know?) and it’s bound to get into your magical laptop that requires neither wifi or electricity.  No problem, I’m sure the Geek Squad will bring you another one right quick.

And, of course… water.  There’s water.  There’s a primary piece of equipment that requires electricity to function.  There’s a dumbass sitting between the two.  This is not a good look.  Presumably you’ve run a drop cord from the bar in order to get yourself right and properly electrocuted.

In conclusion, the closest you’re ever getting to working on that beach is sitting at the bar facing the beach.  And while that’s not nothing, it’s not working from the beach, not by a long shot.

Also, I’m betting this is a public beach because you’re still just a lowly freelance writer.  So add in “errant Frisbees being accidentally chucked at your head” and go set up a proper office already.